Background
7-Eleven is an international brand of convenience stores with over 64,000 locations worldwide. The holding company for 7-Eleven is based in Japan with subsidiary 7-Eleven, Inc. responsible for the operations, franchising, or licensing of most locations within the United States. Of all 7-Elevens within the U.S., 7,890 are operated or franchised by 7-Eleven, Inc.

Many of these 7,890 outlets occupy properties with leases that are held or guaranteed by 7-Eleven, Inc., which enjoys credit ratings of AA- from S&P and Baa1 from Moody’s. The stores are highly e-commerce resistant due to their primary offering of food and drink items that are conveniently packaged or prepared for individual consumption.

On-market cap rates and contributing factors
In Q2, ’18, the average cap rate for on-market 7-Eleven properties spiked to 5.21% after hovering at two to three basis points above 5% throughout the previous three quarters. To explain this phenomenon, Quantum compiled data on over 100 7-Eleven properties that were marketed during the past year. The data reveals several correlations. Although such correlations don’t necessarily demonstrate causation, some theories explaining the recent cap spike might be reasonably inferred. Quantum believes the spike was due to seller expectations of lower demand and greater supply. 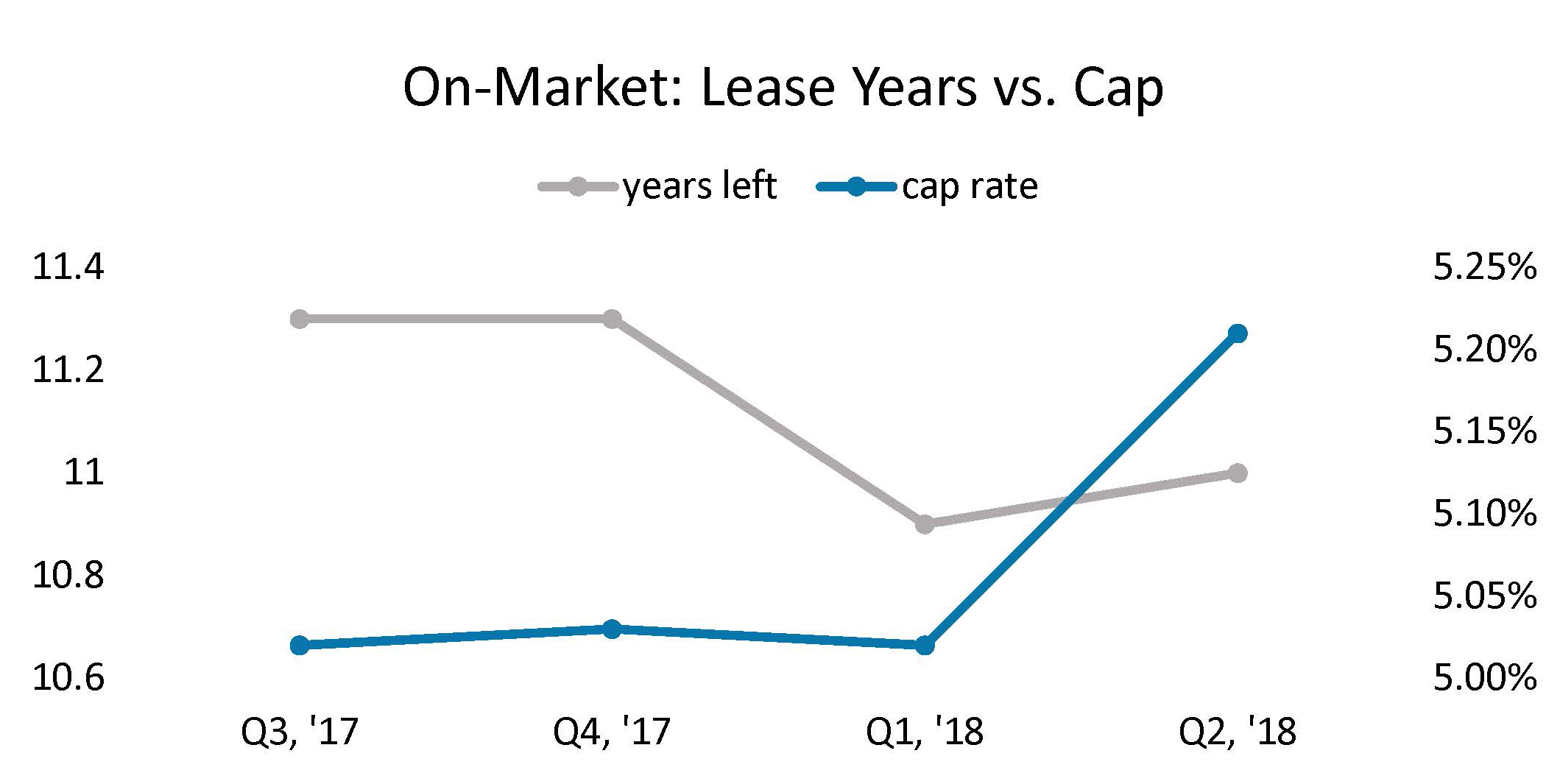 Sellers are right to respond this way. The relationship between lease term and cap rate remains well-defined, as exhibited by the inverse correlation observed among sales of 7-Eleven properties over the past year:

Expectations of lower demand would have also been caused by rising interest rates. The federal funds target rate has increased by 25 basis points in each of the last four quarters so that in now sits at 2%, a full percentage point higher than a year ago:

The FED has indicated that it intends to hike the rate five more times by the end of 2019. As interest rates rise, investors require higher rates of return throughout the economy, including the market for net leased investments.

On the supply side, Quantum’s interactions with sellers suggest that there has been a proliferation of blending and extending that resulted in more marketable properties and consequently an increase in supply. Blending and extending, in which the remaining time on a lease is extended with renegotiated terms, improves a lease’s consistency with prevailing or forecasted market conditions. Especially in the face of inflation, this brings additional properties onto the market.