Net Lease Pharmacy Industry Overview
CVS and Walgreens are the market leaders in the U.S. drugstore industry accounting for more than half of the market share in top metropolitan areas. Over the years, drugstores have evolved into all-encompassing health service providers and as a result have strategically positioned themselves to diversify their portfolios by acquiring key competitors and forging partnerships to protect themselves from growing online threat. Industry demand is driven by an aging population, health issues, and advances in medical treatment. Drugstores rely heavily on their prescription business, which has grown over the years, however same store comparables for front of store sales have decreased. Total 2017 retail sales for prescription drugs filled at pharmacies surpassed $397B* and are speculated to have been upwards of $426B. 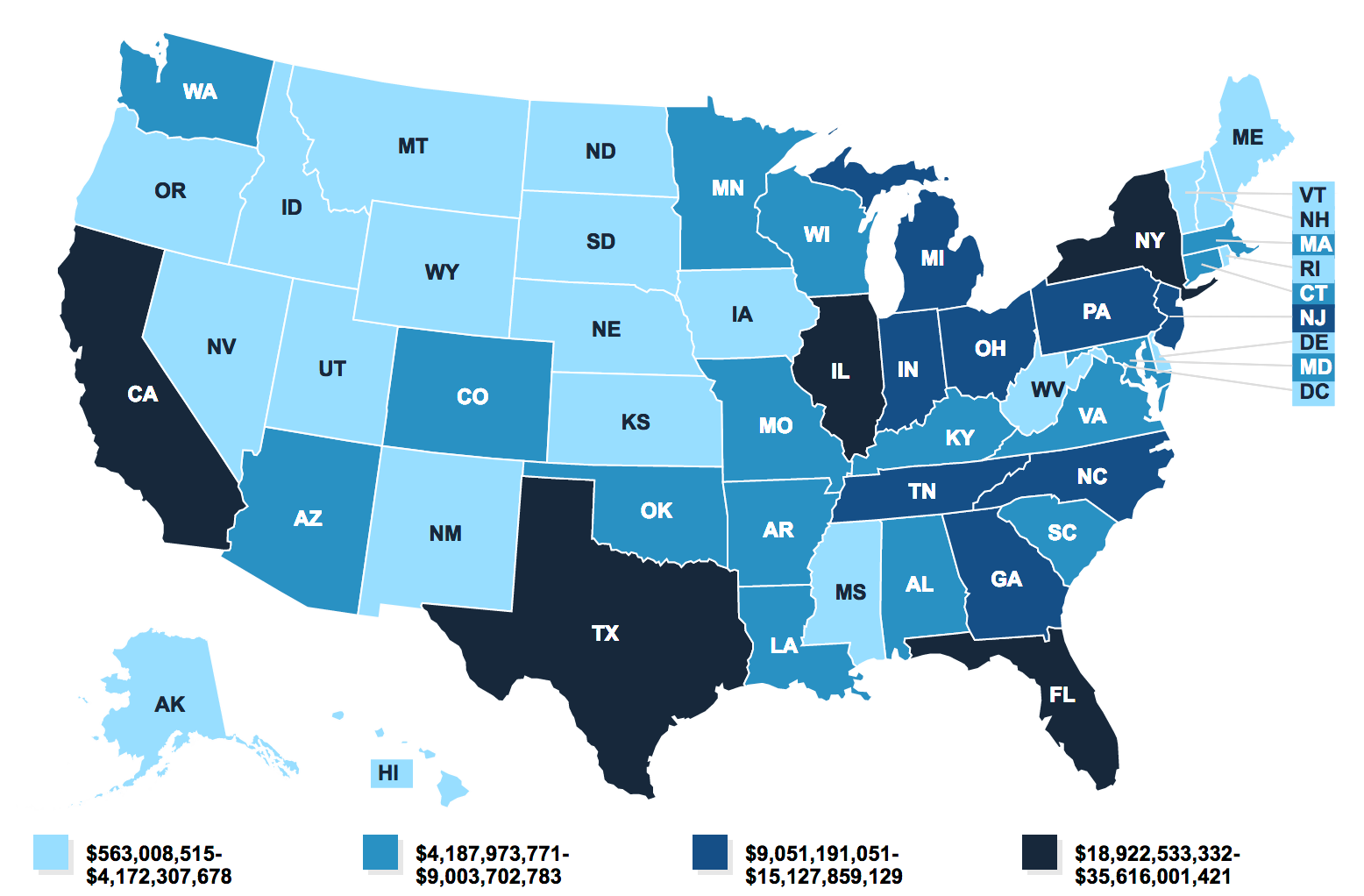 Mergers & Acquisitions in the Industry
The industry is emerging with new acquisitions and new market players.

Emerging Market Entry
The sector is bracing itself for the speculative entry of Amazon and the impact of its joint venture partners Berkshire Hathaway and JPMorgan. Amazon has taken quiet steps in gaining approval to become a wholesale distributor in 12 states. When and how Amazon makes an entry to the pharmacy or healthcare market will determine what affects it will have on brick and mortar drugstores.

Forecast/Market Trends
The US drugstore sector is becoming increasingly crowded restricting opportunities for organic store openings. Larger mergers like CVS/Aetna combines one of the biggest drugstore chains with the third largest health insurer and is disrupting to the status quo of healthcare delivery. CVS will benefit by pushing some of Aetna’s 22 million customers into CVS brick and mortar stores. Pharmacies are the profit drivers producing upwards of 70% of revenue despite only occupying 10% of the floor plan.

The long-term effects of these mergers will eventually make it harder for new insurers to enter the market thus reducing competition since they won’t be able to negotiate lower drug prices like larger firms. This will provide drugstores a competitive edge as more generic drugs become available, which are typically cheaper but could come with higher profit margins than brand name drugs.

Long-term, large key players have been ramping up the acquisition of smaller independent pharmacy chains due to rising competition from private companies and the speculative threat of Amazon. Acquisition activity will continue to increase as drugstores explore how acquisitions can increase foot traffic to the corner drugstore. Consumer trends show that prescriptions are still predominately filled at brick and mortar locations. Despite the conveniences of mail order, most of the 4 billion prescriptions are dispensed at a retail pharmacy location (new scripts and refills). Only 1 in 10 prescriptions is filled by mail.

CVS and Walgreens are stable mature companies and have long been attractive investment properties. In 2017, a private investment group acquired 49 newly developed CVS Pharmacy properties across 16 states in a single transaction. Part of their appeal is the absolute NNN properties with passive income on leases set for an initial 20-25 years and options taking the lease upwards of 75 years.

CVS / PHARMACY
CVS operates approximately 9,600 stores in the US with approximately 7,980 single-tenant stores and more than 1,100 Minute Clinics across 33 states. In fiscal 2017, the company opened 175 stores, closed 81 and relocated 30. Since its first store opening in 1955, the company has strategically expanded its footprint and customer reach with aggressive acquisitions. Two of its largest acquisitions were in 1997 taking over 2,500 stores from Revco and as recently as 2015 acquiring 1,600+ Target pharmacies and clinics. CVS serves over 5M customers daily, 5M patients served by Omnicare annually, 165k Corma patients receiving services annually from its speciality infusion arm, more than 94M PMB members, 68,000+ retail network pharmacies and 75 major health system affiliations. CVS’ diversified business model provides it with multiple revenue streams.

Average retail store sales in 2017 was $8,164,000 per store, a 2.5% decrease over prior year figures, averaging sales of $791/SF. Decreased revenue is based on more customers using the drive-thru to pick up prescriptions and same store sales by more generic drugs, lowering prices of prescriptions. CVS in the past few years has focused on rebranding its beauty sections to entice consumers into stores. Total revenue growth was up 4.1% with total revenues of $18,765.0 MM. Ecommerce sales represent an insignificant share <1% of total revenue. Top three revenue generators by product category: prescription drugs 75%, general merchandise 10.8% and over the counter & personal care 10%.

WALGREENS BOOTS ALLIANCE
Walgreens, Retail Pharmacy USA segment, operates approximately 8,175 stores in the US with 400 walk-in health clinics in store. During Q1 2018, store counts increased by 101 stores. In 2017, Walgreens received approval to purchased 2,186 Rite Aid stores and 3 distribution centers. These properties will be transferred in phases to Walgreens with its goal to be completed by spring 2018. Total integration is anticipated in three years. Walgreens plans to close nearly 600 stores in the portfolio due to store overlap.

Walgreens has a reputed history since its first store opening in 1901. Traditionally conservative, most of the company’s growth has been organic up until the 2000’s. Walgreens became more aggressive in its growth strategy and continues to lead the industry by store count.

Average retail store sales in 2017 was $7,563,000 per store, a 4.2% increase over prior year figures, averaging sales of $756/SF. Total revenue growth was up 2.6% with total revenues of $120,453.0 MM. Ecommerce sales represented 1.7% of total revenue. Top three revenue generators by product category: prescription drugs 67%, general merchandise 24% and non-prescription drugs 9%. An expansion of its mail services helped increase revenue through its formation of a specialty pharmacy and mail service company, AllianceRx Walgreens Prime. Pharmacy drugstore sales increased 5.6% in Q4 2017 vs the previous year quarter primarily due to higher volume. Cheaper generic prices weighed on pharmacy sales, however Walgreens pharmacy sales have been offset with partnerships with pharmacy benefit managers such as Prime Therapeutics in 2016 (to compete with CVS) and Medicare Part D growth. Walgreens’ operations are largely dependent on its pharmacy business. 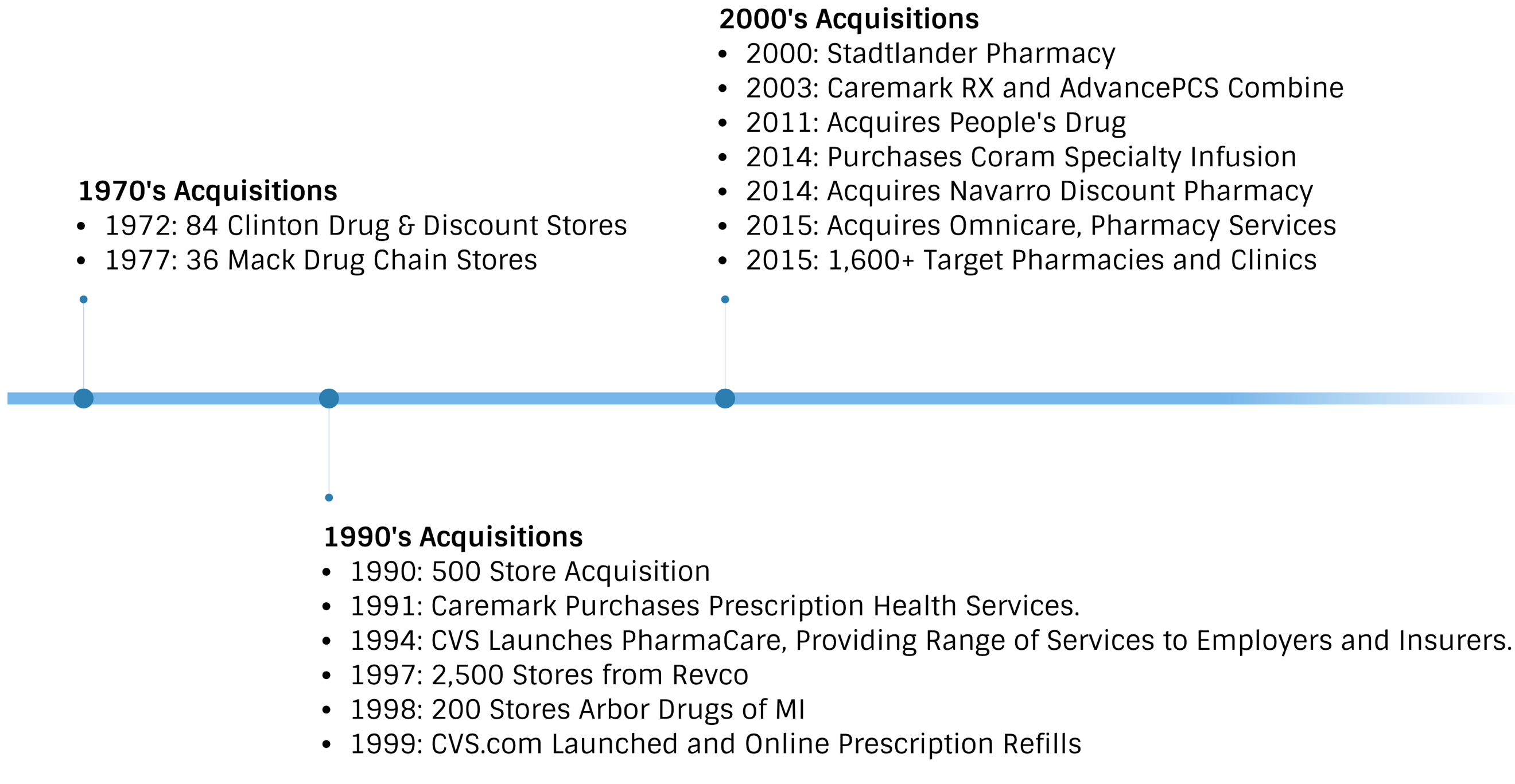 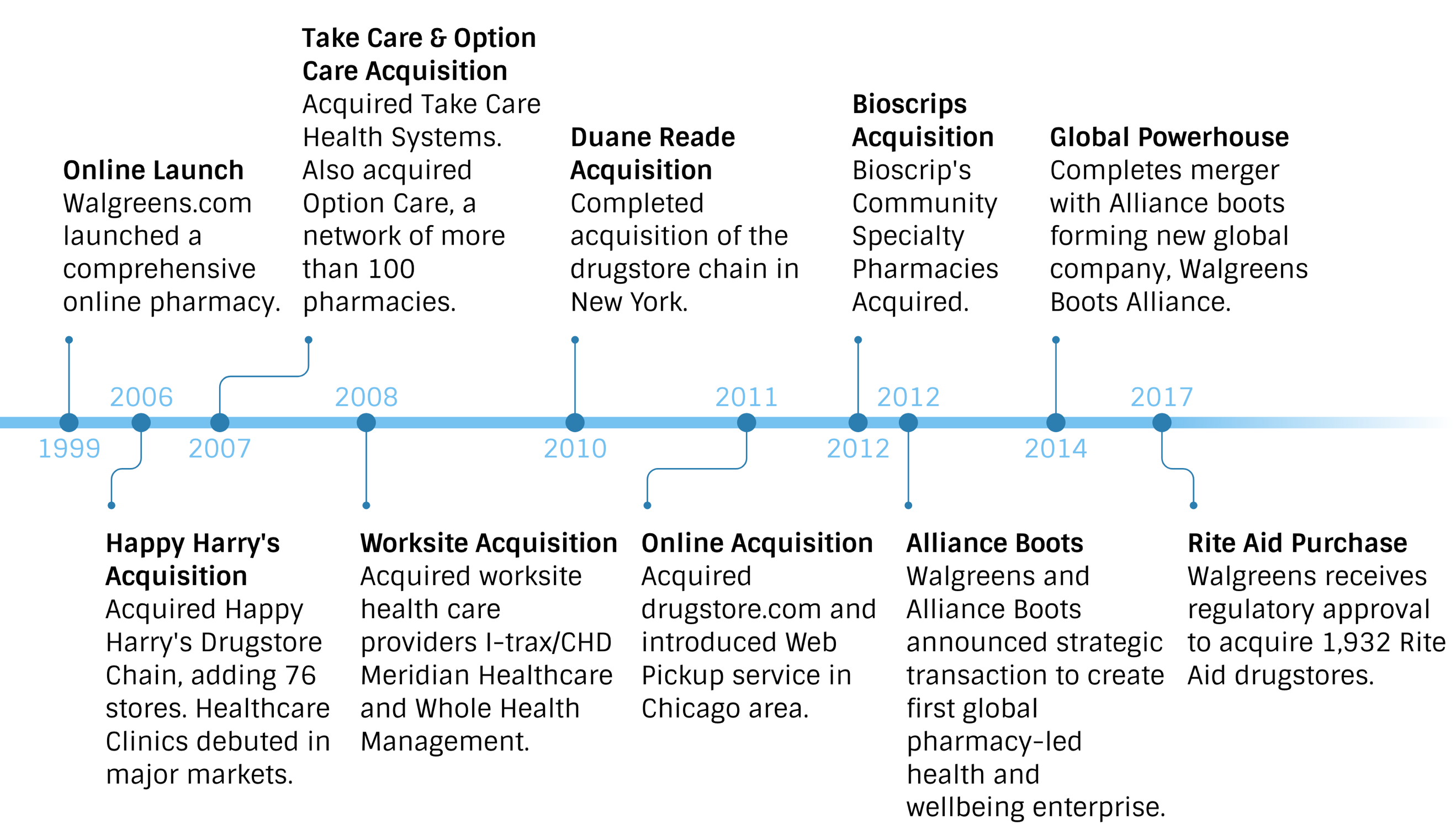 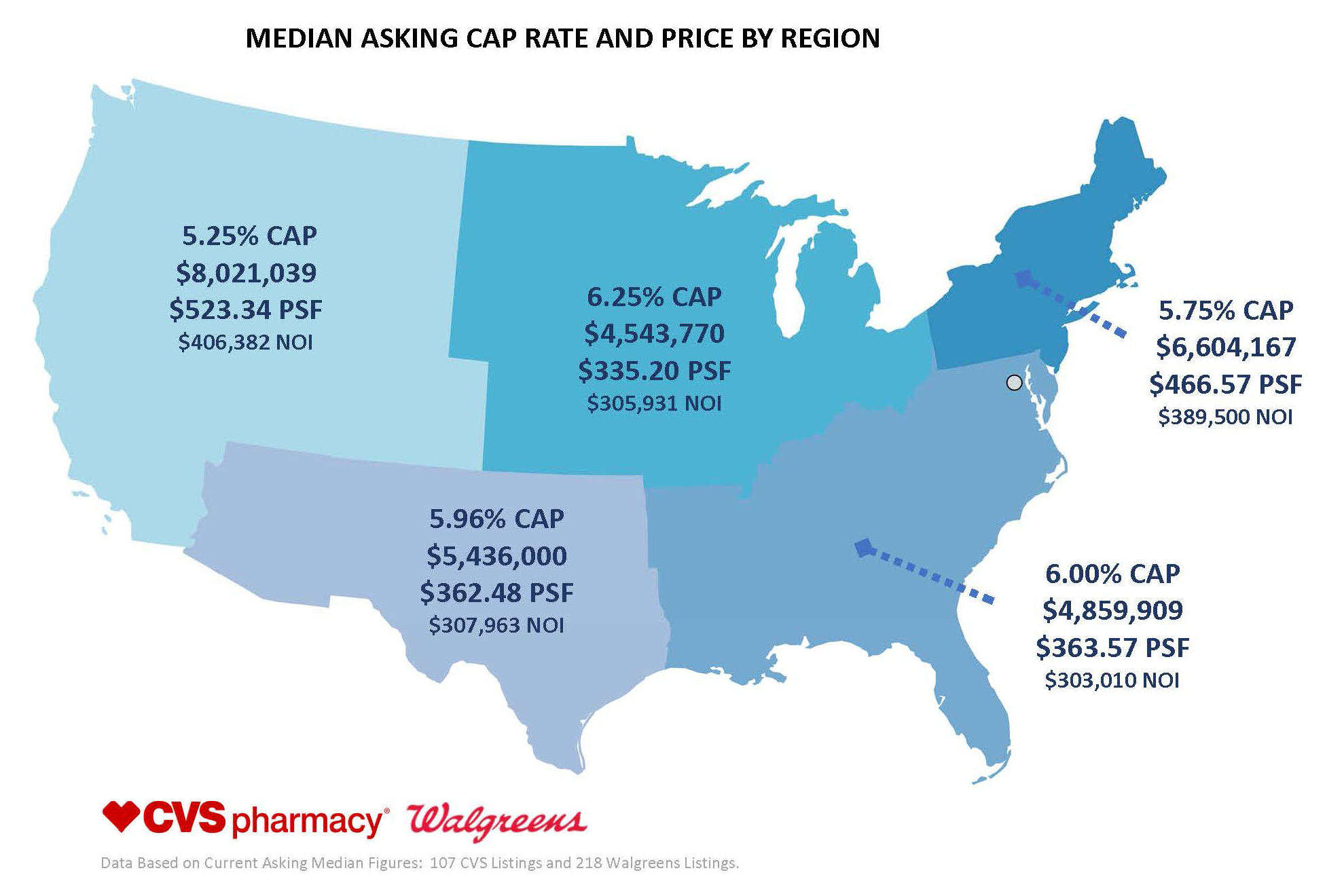