Overview
Historical data indicates higher interest rates have not necessarily weakened real estate returns. Real estate performance has remained resilient despite rising Federal Reserve rates. Prime Rates remained quite low during the initial Fed hike at the end of 2015. At the end of 2018, the Federal Reserve had anticipated that two additional hikes will occur in 2019, however there have been talks for a slow down to keep rates steady.

There is a perception that rising interest rates will drop down property values and real estate return due to higher debt. When taking a closer look at real estate performance, there are a number of factors that may provide protection to overall performance in a rising interest rate environment. Cap rates are influenced by real estate fundamentals (operations), capital flows and investor risk appetite in their respective economic and property market environments.

Data in our 10-year consensus indicates that changes in the 10-Year Treasury Note yields do not necessarily result in changes in cap rates. Federal Reserve hikes are reflective of strengthening economic and employment conditions. Unemployment has experienced steady decline over the past 5 years, the Fed Rate has increased nearing a parallel trajectory. This will continue to drive demand in the real estate market with cap rates below historic averages. Consumer Price Index (CPI) and Real GDP Growth is indicative of a strengthening economic environment. CPI in the same time frame has provided us the most insight for future Fed rate moves, following the same pattern as the Fed Rate. The US Commercial Real Estate (CRE) Cap Rate to Borrowing cost spread remain above 150 bps as debt remains cheap. 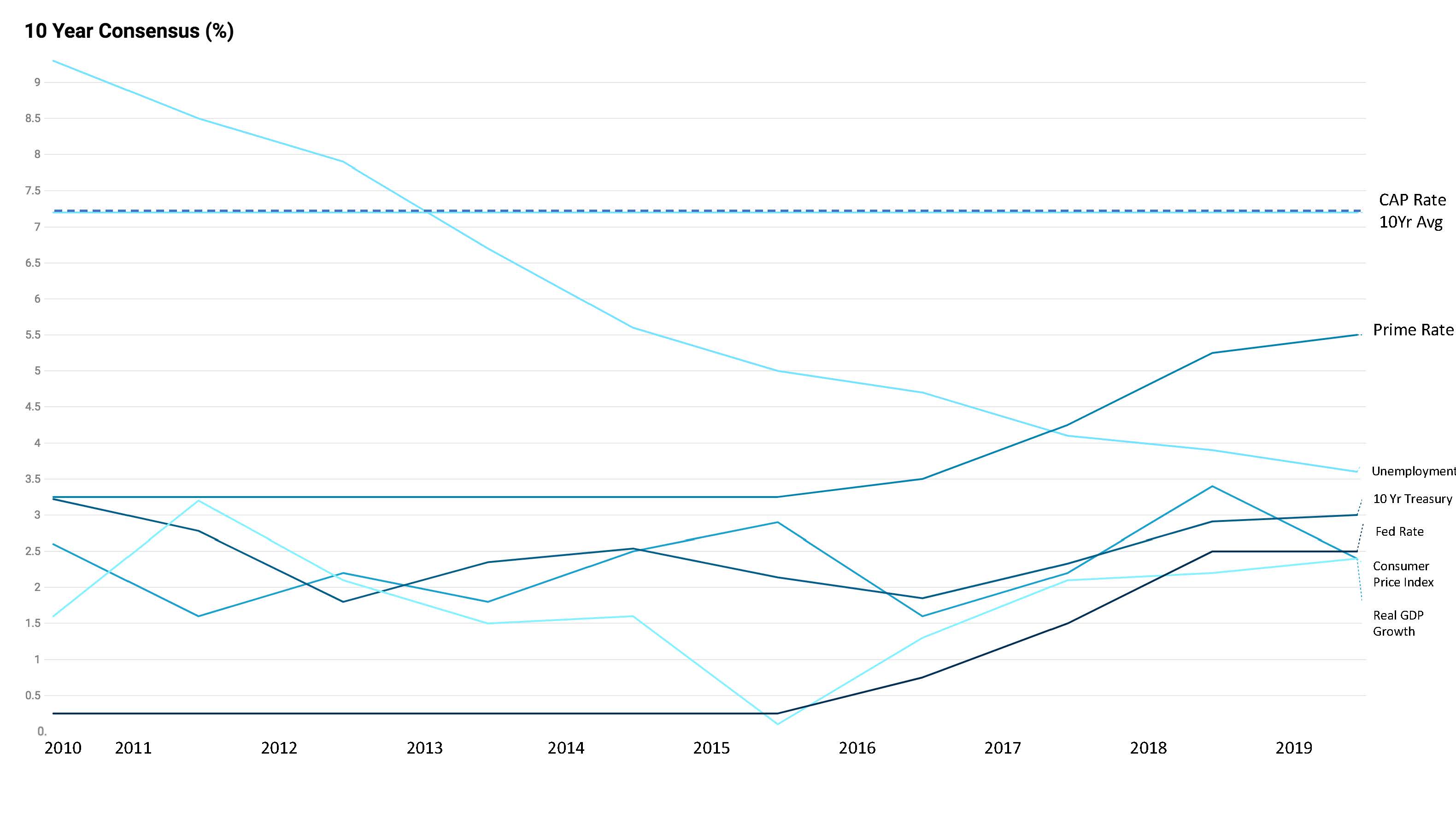 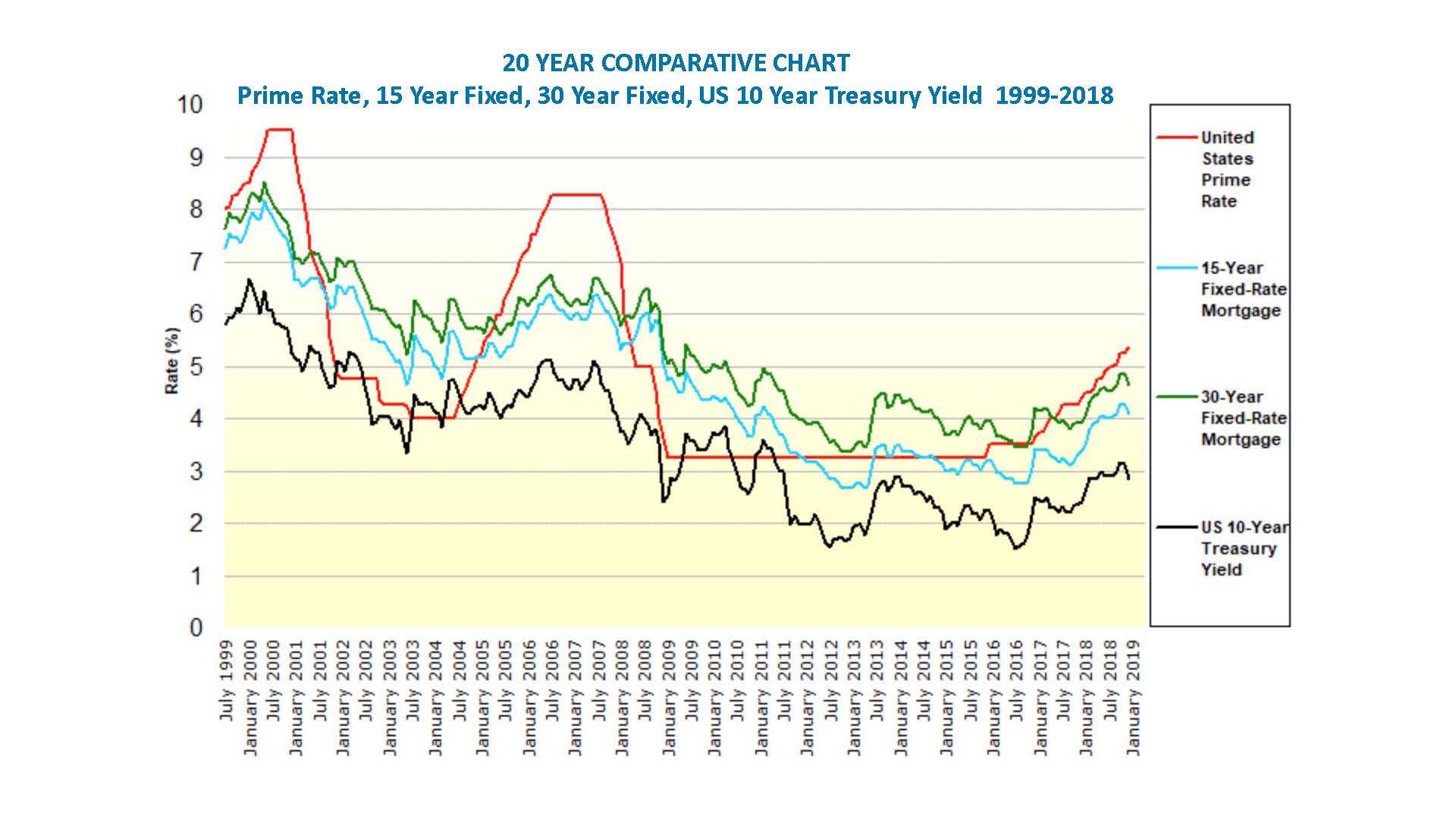 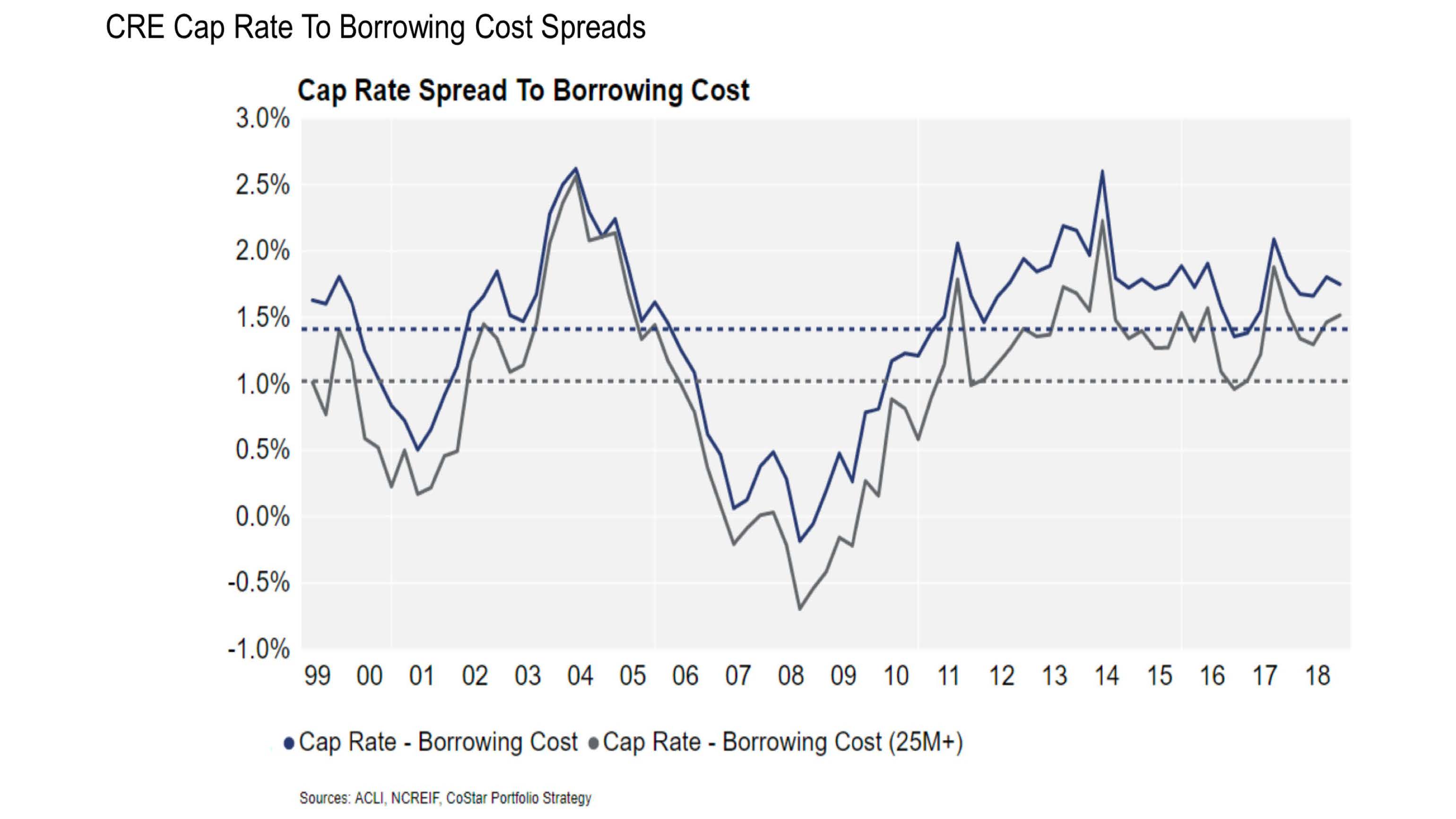 PRIME RATES & FEDERAL RESERVE
Prime rates are the lowest rate that can be borrowed from commercial banks by non-banks. The rate typically tracks with the Federal rate and generally 3% higher. In September 2007, federal funds rate and prime rate dropped over risky subprime mortgage rates. In 2008 the prime rate dropped drastically alongside the Fed’s lowered rate of 1.5%. The Fed rate was essentially 0 since the downturn and has increased parallel to prime rates as the economy strengthened. Historically, prime rate has been as high as 11% in 1983, dropped to around 6% in 2008 and most recently dropping to sit around 5.50% in 2019. Although Prime rates have increased 225bps since 2015, we see that it is atypical to rates pre-2008 just 10 years ago. Rate increases are anticipated to be steadier environment through 2019.

10-YR TREASURY NOTES & CRE CAP RATES
Fed rate and inflation all have some influence over long-term fixed rates, which generally are yield sensitive on the 10-Year Treasury note. Any movement in the long end of the yield curve can affect both buyer perceptions of the relative rates of return on offer as well as the costs of financing. There has been a general increase in the 10-year treasury rate since 2016 and cap rates have been lowering yet steady. Over the course of the last 10 years, the cap rate spreads to the 10-year treasury yield is narrowing to the same range as 2003-2006. The current spread is a healthy cushion against rising interest rates. The 10-year rate is depressed but is still ahead of inflation and the consumer price index (CPI). 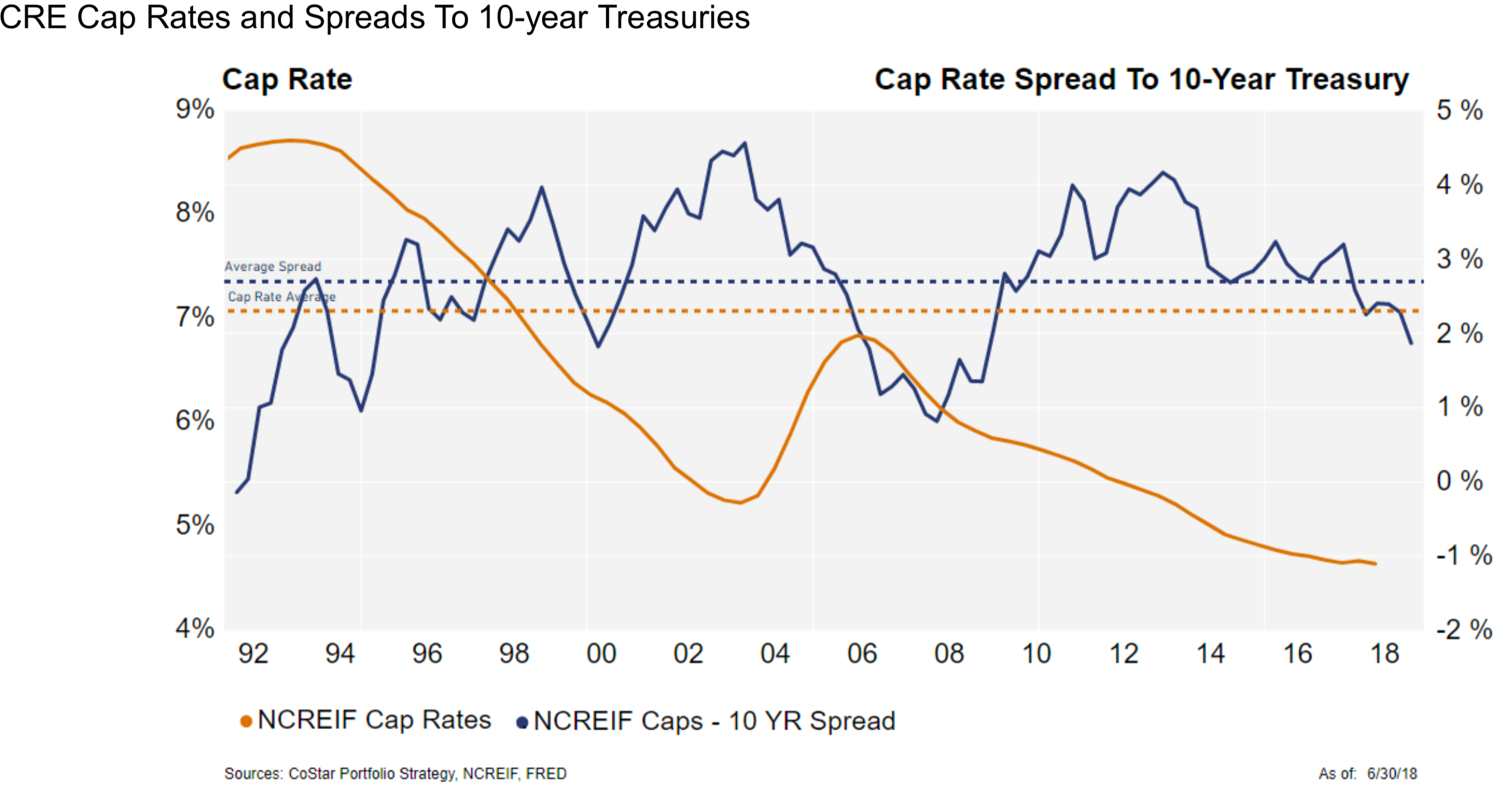 Data shows us that U.S. cap rates remained stable and flat, with deal volume growing slightly despite the eight Federal Reserve interest rate increases since 2015 across all property types. This stability correlates with the stability of the 10 Year Treasury note. CRE and 10-Year Note spreads remain wide, and margins are less at year end 2018. While the anticipation of prime rates increasing steadily, we will see narrowing of these cap rate spreads. 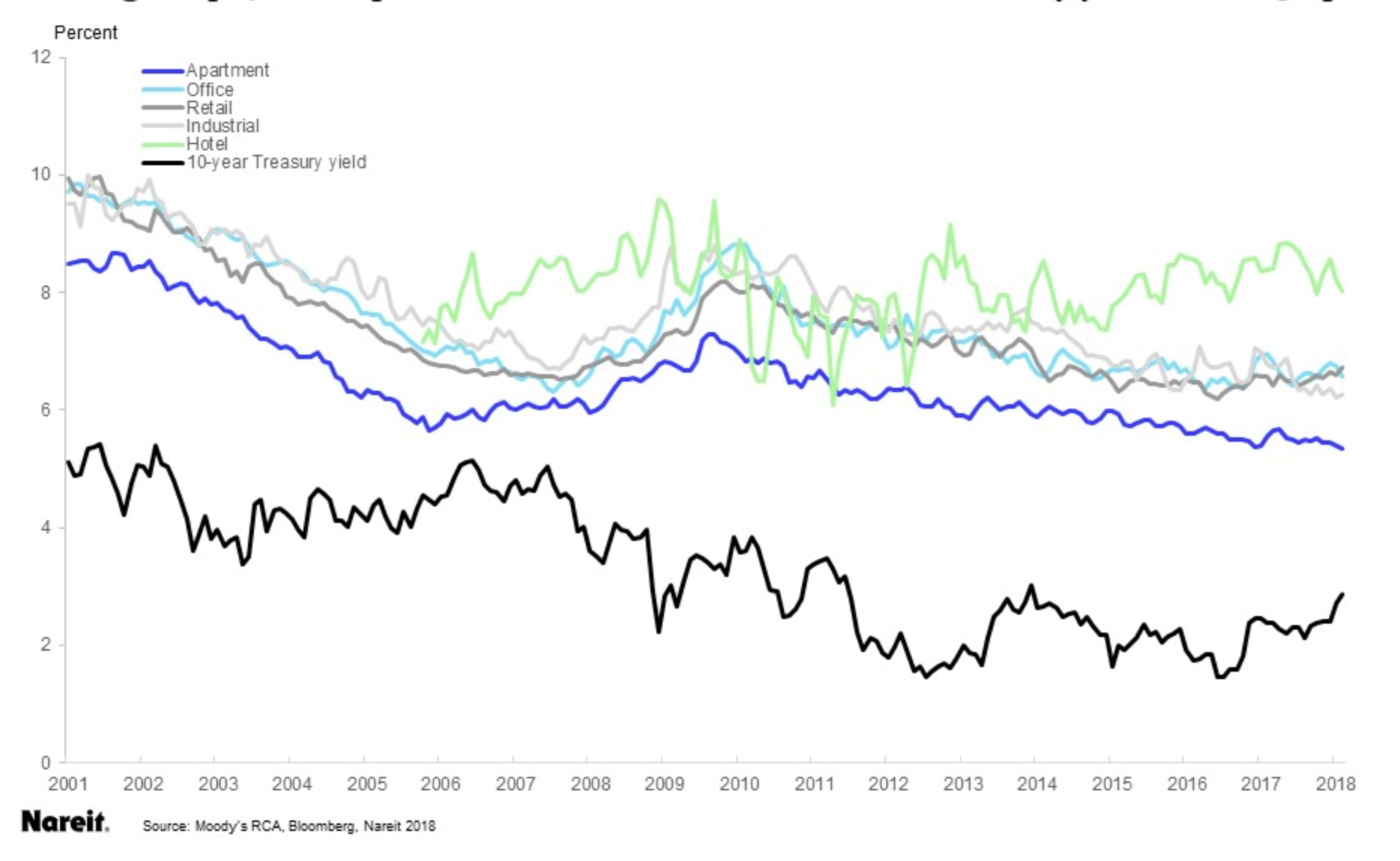