Net-lease cap rates began increasing from all-time lows in the third quarter of 2022 vs. the third quarter of 2021. Cap rates increased, on average, 50 basis points to 5.5%, from a year ago, according to Quantum Real Estate Advisors, Inc. (“Quantum”). The narrowing spread between the cost of capital and asking net-lease cap rates continues to strain the market. This strain has resulted in a widening bid-ask spread, which in turn has slowed transaction volume.

Debt costs have soared over recent months. As interest rates have steeply risen, it has caused a dislocation between the price that leveraged investors can pay and the price at which owners are willing to sell. Interest rates in the U.S. (Federal Funds Rate) are now mounting past 4.00%, up by more than 250 bps from a year ago.

At the beginning of 2022, sales volume in the Net-lease sector was building momentum into Q2 2022. However, there was a dramatic decrease in sales activity in Q3 which was down to only $1.3B. As volume decreased, so has the average asking price. 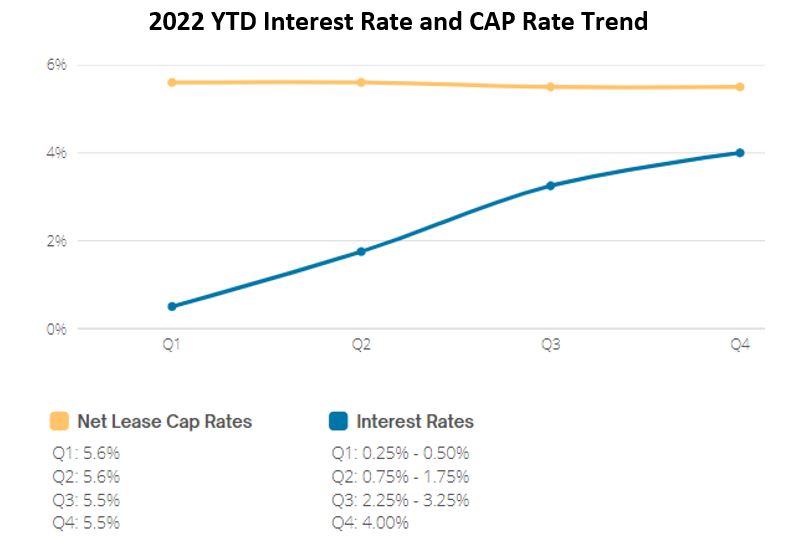 Over the last ten years, the net-lease sector has seen the sale price continue to rise. With cap rates decreasing, overall compression currently hovers at 6.7%. Despite the recent increases in interest rates, the stabilization of cap rates and the slowdown in the market leads us to predict that the expansion/rise of cap rates is inevitable. As the differential between cap rates and interest rates widens, investors are grappling with negative leverage. Negative leverage, which occurs when the yields on commercial real estate are lower than the interest rate on a loan, has become more prevalent as interest rates have risen and valuations have dropped.

The decline in net-lease sales volume is not surprising and further pullback appears warranted as the spread between valuation and transaction cap rates has grown. While transaction activity has started to moderate, pricing has yet to fully reflect the shifting capital markets environment and tapering of foreign investment.1

Retail property sales have now declined for six consecutive months, a trend that began in May and has continued through October. The pullback in activity has come in conjunction with the brisk rise in interest rates seen since Q1 2022. Depending on the financing source, interest rates on stabilized retail assets have increased by 150-250 bps after the lows hit in late 2021 and the volatility seen in the debt markets has had a significant impact on deal flow. Investors are still actively targeting well-performing segments of the market, albeit a bit more selectively.2