Well, 2022 started off with making sure our population became vaccinated. Upon the implementation of this vaccination people’s confidence in going out in public, becoming social, and enjoying the freedom of everyday life started to happen.

This meant that retailers started selling clothes in stores, and the restaurants that sat dormant and were almost on the brink of closing their doors reopened. That’s if they were lucky enough to survive having no customers for over a year. Industrial buildings were packed to the gills with new products and increased consumer demand was at an all-time high. People realized the comforts of home and the housing market earlier this year was firing on all cylinders. Enrollment in senior housing grew and elective surgeries were happening again. The world started getting back to normal.

However, as the world has returned to normal, several financial and economic issues have arisen. The supply chain disruptions on a local, national and global scale led to inventory shortages, driving up prices. The seemingly endless governmental stimulus packages, meant to keep the economy afloat, flooded the market with money, allowing consumers to buy products and services at these higher prices. The significant number of workers who have left the labor market has led to a worker shortage. These factors (and many more) have created significant inflation, with the latest inflation reading running at around 7.1% annualized (down from a peak in mid-2022 of around 9.1%).

The Federal Reserve (The Fed) has an inflation target of roughly 2% on an annualized basis. Given we’ve been running between 5-7% above the Feds target, the Fed has taken aggressive measures to bring inflation down to their targeted level. The main, and really ONLY tool the Fed has used to try and curb inflation is the Fed Funds Rate. For most of the last decade, the Fed Funds rate hovered around 0-0.25%. This led to cheap money and compression in cap rates across all asset classes. In the roughly four-year period leading up to COVID (2016-2019), the Fed SLOWLY increased rates from roughly 0% to around 2%. Once COVID hit, they aggressively LOWERED rates to help stimulate the economy. However, as discussed above, all this cheap money led to very high inflation. Over the roughly last nine months of 2022, the Fed increase the Fed Funds Rate from roughly 0% to around 4.5%, as you can tell this is about a 450% increase in the cost of capital.

In the forward-looking statements from the Fed, the Fed Funds rate is expected to eclipse 5%, at a minimum, in 2023. This is all dependent on the latest inflation reports, jobless claims and a multitude of other data points the Fed will be looking at. At Quantum, for at least the first half of 2023, we anticipate at least another 50-100 basis points in increases. We have already seen some softening with inflation and the job market as well as indications from many large corporations that job cuts are coming. These are all positive developments in the eyes of the Fed.

SO, WHAT DOES THIS MEAN FOR COMMERCIAL REAL ESTATE IN 2023?

This rapid and unprecedented increase in the Fed Funds Rate has driven the cost of capital up significantly. Borrowing costs have more than doubled in many instances, seeing interest rates on commercial properties around 6-6.5% up from 3-3.5% earlier in 2022. Moreover, there are other variables with this tightening of capital; more recourse on loans, lower leverage, more scrutiny with the tenancy/rent roll, higher reserves and the list goes on. Since cap rates compressed so much over the prior decade or so, there is now a misalignment between unleveraged yields and leveraged yields. Buyers were not willing to ‘get aggressive’ with pricing on acquisitions and sellers were reluctant to drop pricing expectations. Transaction volume in the second half of 2022 decreased significantly because of this. 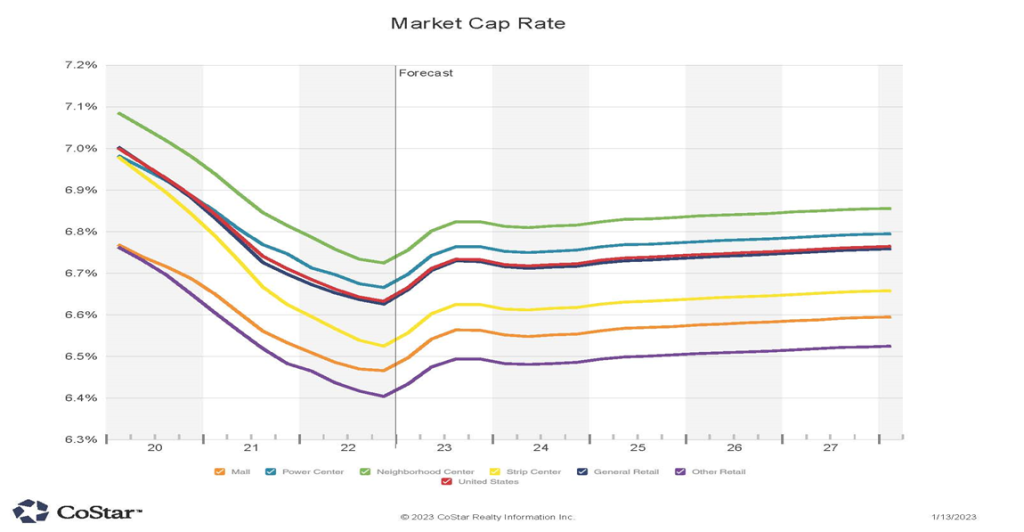 Moving forward into 2023, we see this trend of lower transaction volume continuing, to a certain degree. There will still be hesitancy on the buyers’ side to overpay for property (relative to interest rates), and reluctance on the sellers’ side to reduce pricing. However, we have started to see sellers better understand and accept the new interest rate environment and they are beginning to move on pricing. Additionally, we are starting to see some of the Fed’s policy taking hold, with inflation slowly abating and interest rates stabilizing. We believe this will lead to a slow, but steady return of transaction volume, as 2023 progresses. 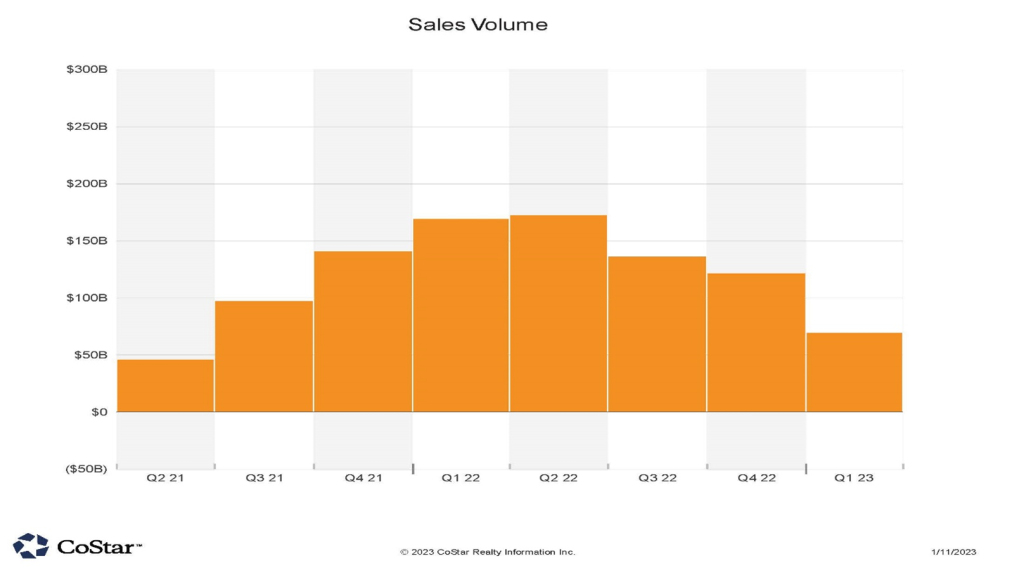 The good news is that consumers still have strong balance sheets, relative confidence in the market, and are still spending. Hence, the Fed’s policies seem to be slowing curbing inflation. There will still be some pain moving forward as the Fed continues with its inflation-fighting policy. However, our view is this will be some near-term pain and within the next 12-18 months, things will feel much more normalized again.